Wow! I’ve been blown away by the response I’ve already had.

Sally, who I’m going to introduce you to in a moment, said we’d never get this far! So thank you so much for getting behind my new book Cultivating Happiness and proving her wrong.

If you missed the announcement, make sure to click here to see all kinds of cool giveaways you can access: https://pennycastlewriter.com/cultivating-happiness/.

Recently a well-meaning writer suggested I should stop talking about Sally because it made me sound mad. Well, Sally didn’t like that at all, so I suppose I should introduce her…

Here’s an excerpt from Cultivating Happiness where you will meet get to know Sally very well. Maybe even better than you wanted to. 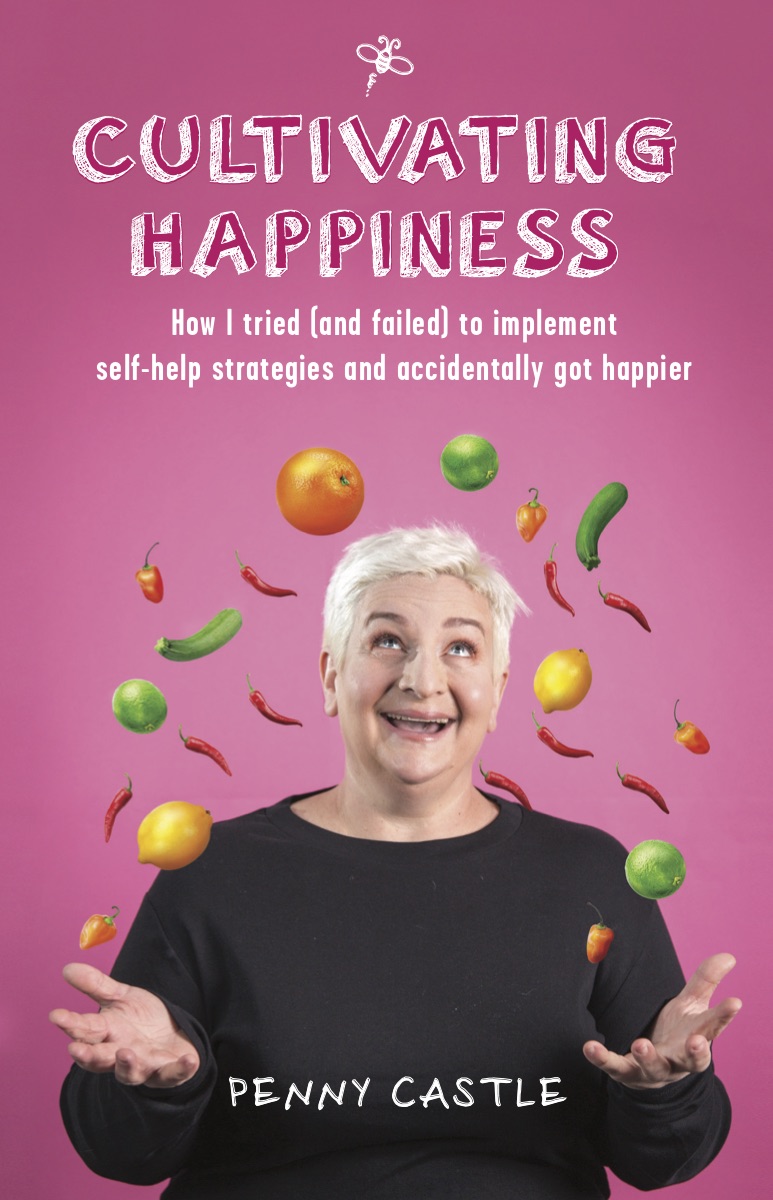 “Do you ever feel like there is a voice in your head criticising you?” I knew all about a voice criticising me. It was the part about that same voice keeping me safe that sounded unlikely.

“You should have said no,” Sally said. “You sound a little touched.”

“Some people find it useful to give the voice a name,” Neil continued. “The idea is that, by acknowledging the voice, we can begin to take control of it. Play with the volume, if you will.”

“Oh? When did you first notice her?”

She arrived in kindergarten. In those days, she looked much more like the cream-skinned, smug-faced vintage china-doll that belonged to a pudding-shaped class-mate whose attraction chiefly lay in her possession of a proper chemistry set.  We were never allowed to touch the precious doll who pouted down with what I supposed was meant to be bee-stung lips, but instead looked like a perpetual grimace of distaste and judgement. Her “real-hair” auburn ringlets lay perfectly about her shoulders and contrasted with the cream satin of her tiny, perfectly stitched blouse. Cream satin that, should my friend ever look at the back of early-Sally, showed the grubbily singed remains of my well-intentioned attempt to introduce the doll to the wonders of the science kit.

No one ever discovered Sally’s secret scorch marks, but my love of the meths-fuelled bunsen burner waned under the weight of her disdainful gaze and whispered comments.

I eventually got a chemistry set of my own and ditched the friend. Sally, though, wasn’t so easy to get rid of.

She joined me in a class where the teacher was introducing us to a new and exciting game called Sleeping Logs.  She emphasised the ‘new’ and ‘exciting’ in a way that, as an adult, I recognise as the slightly manic desperation of a parent whose smile is about to shatter and whose hand is itching for a bottom to smack. The game involved all the children (it felt like there were millions of us but it was an expensive grammar school so there couldn’t have been many) lying as still as logs. The aim was to see how long the children-slash-logs could lie still and be completely quiet. The first one to make a noise or move was the loser.

I have a big brother. I knew a con at fifty paces.

“Shhh,” Sally, as she was to become, hissed in my inner ear. “They’ll think you can’t sit still and everyone will laugh at you.”

So I lay still on the linoleum floor of the sunny, prefabricated extension to the Victorian school building.  The rubber smell of the green canvas-covered gym mat made my nose itch. When no one was looking, I picked at it and flipped up the edge of the carpet and ran my fingers back and forth along the honeycomb rubber until it shredded and left black nuggets under my nails.

The children around got up and dutifully rolled up the gym mats. I stayed, eyes firmly closed. I was the sleepiest of sleeping logs.

“Penny won’t move.” The boy who shared my rug nudged me with his toe. “She’s fallen asleep. She’s having a nap.”

The room broke out in giggles. Only babies had to have a nap in the middle of the day.

“Did you fall asleep?” The teacher crouched down beside me and gently shook my shoulder.

“It’s okay. Sometimes big school can be tiring,” she said.

“Penny was sleeping!” A chant broke out among the children. “She’s a baby.”

“I wasn’t asleep,” I shouted. Hot tears scalded my cheeks and snot dribbled out of my nostrils.

“She was sleeping, and now she’s got a snot,” my former partner shrieked with glee.

I escaped to the bathroom and sat glumly in the toilet at the end. It had a raised wooden box around old hearing pipes to sit on and a narrow slitted window through which I could see the London plane trees beginning to yellow. It was warm and safe and far away from the chants of “sleeper, snotter, sleeper, snotter” that I could still hear.

Thanks again for being a part of the Cultivating Happiness launch! Don’t forget, you have be signed up for the email list and to buy the book by 21 January 2019 in order get access to:

A month of anxiety day 17 – when are you allowed to use nicknames?

The many moods of chemotherapy

Take a Sneak Peek at my new Book

Cultivating Happiness – A little bit more about the book!